Jason Priestley, Jennie Garth, Ian Ziering, Gabrielle Carteris, Brian Austin Green and Tori Spelling, the original stars of “Beverly Hills, 90210,” the groundbreaking teen drama that defined Southern California life, are set to return to FOX, the network they called home for the entire decade of the 1990s, in a six-episode event series, 90210. Chris Alberghini and Mike Chessler (“90210,” “Awkward”) will write and executive-produce 90210. The series is scheduled to air Summer 2019.

90210  comes with a big twist: Priestley, Garth, Ziering, Carteris, Green and Spelling will play heightened versions of themselves in a brand-new serialized drama – with a healthy dose of irreverence – that is inspired by their real lives and relationships.

Having gone their separate ways since the original series ended 19 years ago, Jason, Jennie, Ian, Gabrielle, Brian and Tori reunite when one of them suggests it’s time to get a “Beverly Hills,  90210” reboot up and running.  But getting it going may make for an even more delicious soap than the reboot itself.  What will happen when first loves, old romances, friends and frenemies come back together, as this iconic cast – whom the whole world watched grow up together – attempts to continue from where they left off?

“‘Beverly Hills, 90210’ left an indelible impact on pop culture and an entire generation,” said Michael Thorn, President, Entertainment, FOX.  “Its powerful legacy is an important part of our network’s DNA – bold stories not told anywhere else and bigger-than-life-characters – and we’re honored to bring back the beloved original cast members for 90210.”

Spawning generations of imitators, “Beverly Hills, 90210” premiered on FOX on October 4, 1990, when it became an instant pop culture sensation and one of the most adored programs in the network’s history.  Centered on the tony Los Angeles community identified in its title, the show aired for 10 seasons, during which it documented the trials and tribulations of a group of friends from high school to college and into early adulthood, as they navigated a myriad of coming-of-age dramas and complex rivalries, often making real-world headlines by tackling controversial and socially relevant topics.

90210 will be produced by CBS Television Studios and FOX Entertainment. It will be executive-produced by Chris Alberghini, Mike Chessler, Gabrielle Carteris, Jennie Garth, Brian Austin Green, Jason Priestley, Tori Spelling and Ian Ziering. The series was conceived by Alberghini, Chessler, Spelling and Garth. “Like” 90210 on Facebook at facebook.com/90210onFOX. Follow the series on Twitter @90210onFOX and join the discussion at #90210onFOX. Check out photos and videos on Instagram@90210onFOX.

iHeartMedia also announced that Taylor Swift will receive the iHeartRadio Tour of the Year Award for her Reputation Stadium Tour. With more than two million tickets sold in the U.S. and grossing $266 million, it is the highest-selling U.S. tour in history by any artist. The Taylor Swift Reputation Stadium Tour broke Swift’s own record for highest-grossing tour by a woman. It was critically acclaimed for its cutting-edge, large-scale production value that gave tens of thousands of fans in attendance each night a rare and intimate glimpse at what makes Swift one of today’s greatest performers. The tour, which kicked off in May 2018 in Glendale, AZ, also traveled to Canada, Europe, Australia, New Zealand and Asia, and was made into a special concert film for Netflix. Swift will be in attendance to accept her award.

Social voting began on January 9 and will close on March 7. Fans can vote on Twitter using the appropriate category and nominee hashtags or by visiting iHeartRadio.com/awards.

This year’s awards will feature a broad array of categories, including Artist of the Year, Best Duo/Group of the Year and individual winners for Album of the Year in music’s biggest genres, including Pop, Country, Alternative Rock, Rock, Dance, Hip-Hop, R&B, Latin and Regional Mexican formats. For the third year, the 2019 Best New Artist awards will be grouped by music format and format winners will then become finalists for the top title of Best New Artist.

Proud partners of the 2019 iHEARTRADIO MUSIC AWARDS include the feature film “Five Feet Apart” in theaters March 15, L’Oréal Paris, Taco Bell®, TikTok and Total Wireless, with more to be announced.

Executive producers for the iHEARTRADIO MUSIC AWARDS are Joel Gallen for Tenth Planet and John Sykes, Tom Poleman and Lee Rolontz for iHeartMedia.

Tickets are currently on sale to the general public at axs.com.

iHeartMedia is the number one audio company in the United States, reaching nine out of 10 Americans every month – and with its quarter of a billion monthly listeners, has a greater reach than any other media company in the U.S. The company’s leadership position in audio extends across multiple platforms including 850 live broadcast stations; streaming music, radio and on demand via its iHeartRadio digital service available across more than 250 platforms and 2,000 devices including smart speakers, digital auto dashes, tablets, wearables, smartphones, virtual assistants, TVs and gaming consoles; through its influencers; social; branded iconic live music events; and podcasts as the #1 commercial podcast publisher globally. iHeartMedia also leads the audio industry in analytics and attribution technology for its marketing partners, using data from its massive consumer base. iHeartMedia is a division of iHeartMedia, Inc. (PINK: IHRTQ). Visit iHeartMedia.com for more company information. 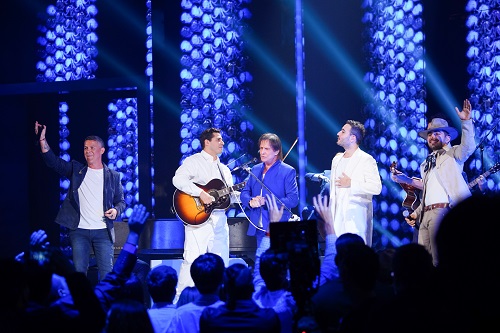